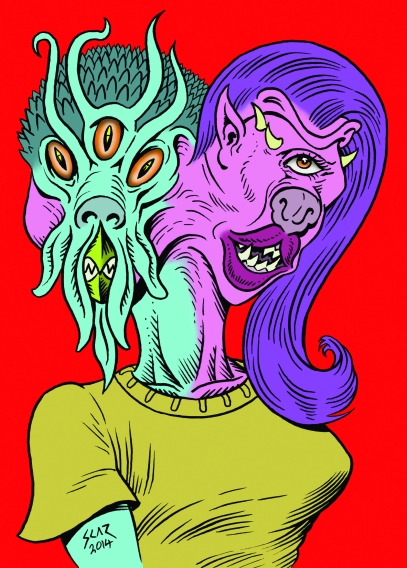 Based in the state of Victoria, Steve Carter and Antoinette Rydyr are a pair of artists/writers going by the nomenclature of ‘S.C.A.R‘. Get it? Together, they work in the fields of sci-fi, horror, fantasy, satire, and surrealism — often bending the borders between each.

“We create in a variety of mediums including prose fiction, illustration, comic books, screenplays — and even music, with experimental bands TeknoSadisT and FistFunk Futurists. In 2010, our screenplay Curse of the Swampies won Best Feature Film Screenplay at the A Night Of Horror International Film Festival.

“We met at a comic book artists’ and writers’ meeting in Sydney in 1991, discovering that we had very common artistic tastes and interests. Turned out we were creatively compatible, and made a pretty good team. Thus S.C.A.R was formed — an acronym from our initials.

“Our concentration has been on pushing original ideas rather than freelancing and chasing established franchises. We also didn’t stringently divide the tasks — we both wrote and drew and worked on each other’s ideas.”

What comics are you involved in?

“Steve began with Phantastique, of which the first issue appeared on the newsstand in 1985. The final and fourth issue appeared in 1986. Phantastique was the first comic book of its kind published by Aussies to be commercially released and distributed on the national newsstand. The focus of the comic was to present impactful horror imagery and weird SF/horror stories to a wider readership, rather than produce yet another comic book title full of safe mystery, thrillers, mainstream fantasy and superhero stories. We’ve never believed that comics are simply just for kids. At the time, Phantastique created a controversy… with some issues banned in various states.

“In 1990 Steve published Charnel House #1, which was also distributed on the newsstand. Despite minimal promotion, the title did particularly well.

“In 1995, Antoinette published Poor Bitch in the U.S.A. — the comic was distributed worldwide. 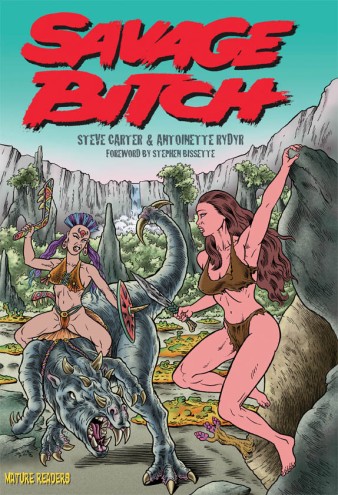 “We also produced our first graphic novel Savage Bitch, which compiles our weekly serial originally published in the national magazine Picture. Savage Bitch was compiled by another comics creator, Dave Heinrich, and it features an introduction by legendary comics icon Stephen R. Bissette.”

“Freedom of expression. Stories to tell. A need to create the kind of comics we’d like to see and read… All you need is a pencil and paper, and you can create a whole other world! We value total freedom of expression. No artistic compromise. A fertile imagination knows no limits.”

“There are some brilliant artists currently rising up in Australia, but our influences extend further back and to overseas inspiration. Growing up, the only creative expression in Australia was parochial — and as we have always been interested in sci-fi and horror, we had to look beyond our shores.

“We have both always had an inherent talent and interest in art. We’ve forever been attracted to visual things. It was the surrealists, Bosch, Ernst, Bruegel, Magritte, Dalí, the pop art of Basil Wolverton and Ed “Big Daddy” Roth, et cetera, and early images of pulp/SF and horror that inspired us — along with comic books from the 1960s, primarily Gold Key and early Marvel comic art by [Jack] Kirby and [Steve] Ditko specifically.

“Another inspiration was 1950s sci-fi films and TV shows like The Outer Limits, Twilight Zone, films by Ray Harryhausen, and Japanese monster movies. Well before the time either of us had actually seen an EC comic, we had been independently creating grotesque and surreal comic art and illustrations.”

“There appears to a kind of ‘comics renaissance’ in Australia — but a lot of the people have been working at it for many, many years.

“There’s excellent new talent building on what came before, and the comic meetings where creatives gather and meet each month has been inspirational. Unfortunately, there is no comic book ‘industry’ in Australia — with no major publishers supporting comic books as there are in America, Japan and Europe. The industry is made up of enthusiastic individuals investing their own time, money and energies in creating something from nothing.

“How do you account for it? Perhaps the internet and comic conventions have helped to open things up; the opportunity to collaborate with other talent all over Australia and in other countries. But probably the real reason is that comics have become huge. They are big business. So many movies and TV shows are based on comic books.

“And the reason is because the genesis of new and original ideas can be found in comics — as there are no limits to a fertile imagination.”

SCAR can be found at www.weirdwildart.com

book talk from the book world